We often are not so attentive of middles – silver medals, middles of processes, middles of journeys, etc.  We like to focus mostly on the extremes.  However, there are times where the middle can be very helpful.  I’ll share two examples to help demonstrate the value of the middle.

Conflict has become a misunderstood concept as of late.  For decades, we have been conditioned to embrace it to win.  Or, to avoid conflict at all costs.  Both extremes have disastrous consequences.

One extreme of the conflict continuum: High conflict – The bullring
At one extreme of the conflict continuum, we have constant fighting.  This fighting takes place with personal attacks, uses demeaning language, has tempers soaring, and is not a good place to be.  Notwithstanding Hollywood movies glorifying the alpha male (or maybe female) taking down his (or maybe her) opponents and becoming victorious, entertainment scripts should not be used as life templates.  No one likes to be here.  An environment where people are constantly yelling at one another, taking each other down, is not healthy conflict at all and is a terrible environment for decision-making.  Many courses and workshops are devoted to dealing with bullying and harassment – help is certainly out there for this.

The other extreme of the conflict continuum: Low conflict – Choose your term
At the other side of the conflict continuum, we have a choice of terminology.  Toxic positivity, ruinous empathy, artificial harmony, willful blindness, functional stupidity – call it what you wish.  It is the opposite of yelling and screaming.  It is consensus driven, group-think poisoned, and has a patina of niceness that impedes everyone from saying what they would like to say, or what needs to be said.  It is counter intuitive that chronic niceness can be so destructive, as no one is yelling, everyone is very civil, and it looks on the surface that things are going well.  Quoting from the BestSelf Co.’ s Relationship Guide, “How often do you have disagreements? If you don’t, rate this category ‘low’. Even if your relationship seems peaceful, there’s no such thing as a conflict-free relationship.”

Another way to look at it is how wanting to be nice to someone obscures your ability to tell them what they need to know. “Ruinous Empathy™ is “nice” but ultimately unhelpful or even damaging. It’s what happens when you care about someone personally, but fail to challenge them directly. It’s praise that isn’t specific enough to help the person understand what was good, or criticism that is sugar-coated and unclear. Ruinous Empathy is seeing somebody with their fly down, but, not wanting to embarrass them, saying nothing, with the result that 15 more people see them with their fly down — more embarrassing for them. So, not so “nice” after all.

Are you familiar with the Johari Window?  It can be a very helpful construct to deal with this end of the conflict continuum.  It is a 2×2 of known to self and others, and their inverse.  The 1st quadrant is known to self and others – and is called the arena.  It is how we show up in the world.  The goal is to have the arena as large as possible.  The 2nd quadrant is our deep, dark secrets that we know and others don’t.  There will always be something in this quadrant, and with the current emphasis on the power of vulnerability, it may be comparatively little, as more and more becomes known to others.  The 3rd quadrant is not known to others nor ourselves, and many may never know this aspect of themselves.  Accessing this may need professional help.  But what I wanted to introduce is the 4th quadrant, our blind spots.  These are what others know of us, but what we do not know of ourselves. And, once again, the idea is to put this in the arena, so that we know what our blind spots are. 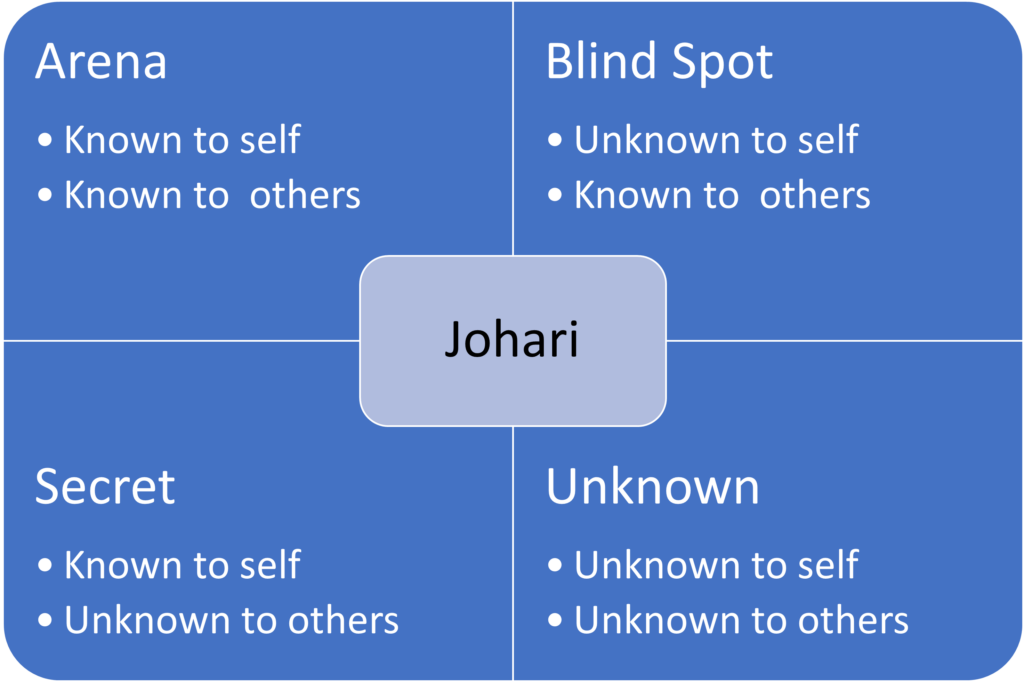 To do this, though, we need someone to tell us, as by definition we cannot identify our blind spots.  We can help others identify theirs, and contrary to being mean, telling someone in a caring way what their blind spot is can be the greatest gift we can ever give one another.  It does need vulnerability and might be helped with a bit of humour.

One team had undertaken this exercise and gave rapper names to themselves.  Stubbs is the name for one who is stubborn, not open to new ideas.  Lil’ pain is the name given to the member who causes others pain and being too aggressive in getting things done.  AK Short is the name for one who is short with people, instead of engaging, and Dr BPop is the leader, and a bubble popper, and does not celebrate little victories.  Now, instead of silence and awkward stares to the floor when inappropriate behaviour is displayed, team members are equipped to say, “Hey AK Short – try not to be short with others, remember?” “Stubbs, I know this new idea is hard for you, but you’ve got to try”.  It can be a bit more playful to say “Dr BPop, you’ve got to stop popping bubbles!” than to call out behaviour that might still be in Dr BPop’s blind spot.

The middle of the continuum: just right
When the team starts to depart from toxic positivity/ruinous empathy, they assume that they will in one giant leap end up in the bullring extreme, but this does not happen.  They move in a stepwise fashion across the continuum, debating issues, perhaps getting heated and yelling – but about the issues, not the people.  Passion should be ignited, and people may look aggressive, but if they are truly involved in conflict (as opposed to one upmanship), it should help a team get to the best answer.  And the middle of the conflict continuum is where the best decisions can be made.  Occasionally, especially if teams are new at this, someone will make some comment that crosses the line towards the bullring. And the joy of a healthy team is that this can be called out (perhaps using a rapper name), apologies are made, the team returns to the middle, and all is for the better.

The middle of the conflict continuum – where we all should want to be.

CULTURAL ACCOUNTABILITY AND THE SPECTRUM OF INFLUENCE

Influence and culture are popular words these days – we all know of our circles of influence, there is a lot of material out there on how to influence, and influence seems to be the desired skill of the new workplace.  Many leaders are very focused on the outcome of cultural work – that culture is improving.   To get to an improving culture, they tend to migrate to the extremes of the spectrum of influence and use these to get cultural accountability.

One extreme of the spectrum of influence: Manipulation
Influence at this extreme looks like trickery.  Deception is employed to get people to a place they are not getting to willingly.  Using manipulation to make others culturally accountable is not a healthy way to influence.

The other extreme of the spectrum of influence: Coercion
Influence at this extreme looks like forcing.  It is using one’s power to get others to places they are not going to willingly.   Bullying too is not a healthy way to use influence to make others culturally accountable.

The middle of the spectrum of influence – Persuasion
Persuasion is a legitimate form of influence.  There are plenty of tools that can be used here:

And the list goes on.   There is a lifetime of curriculum in the middle.

Holding people culturally accountable means using persuasion on the spectrum of influence – learning and using the many tools that can motivate people to get to where you would like them to go.  And there is plenty of space and variety in the middle, whereby the extremes of manipulation and coercion can be avoided.  The middle of the cultural accountability spectrum of influence is where we want to be.

In conclusion, the middle can be the best place.  In both the Conflict Continuum and the Cultural Accountability Spectrum of Influence, the extremes represent areas we do not want to be, but the middle of both models is the ideal place for leaders and teams to interact with one another, make the best decisions they can, and overall render their organizations healthier.